The Heart of Downtown Fargo Has a New Destination

Nestled among much-loved businesses like Blackbird Woodfire Pizza and Silver Lining Creamery as well as the nearly complete Block 9 project, Broadway Square is the new heart of downtown Fargo. The newest addition to Fargo’s urban center is currently home to an ice rink complete with skate rentals, and the Fargo Park District is getting ready for the square’s first summer of programming, featuring movie nights, concerts, and the Red River Market.

An outdoor room to draw Fargoans and tourists alike to Fargo’s downtown was always part of the vision for Block 9. During Downtown Fargo: An Urban-Infill Competition held in 2010, Kilbourne Group received 160 entries from 23 different countries. Nearly every design garnered by the competition included community outdoor space. In selecting the design now redefining downtown Fargo’s skyline, Kilbourne Group sought to create an open public space and to capture the same success experienced by Main Street Square in Rapid City, South Dakota. 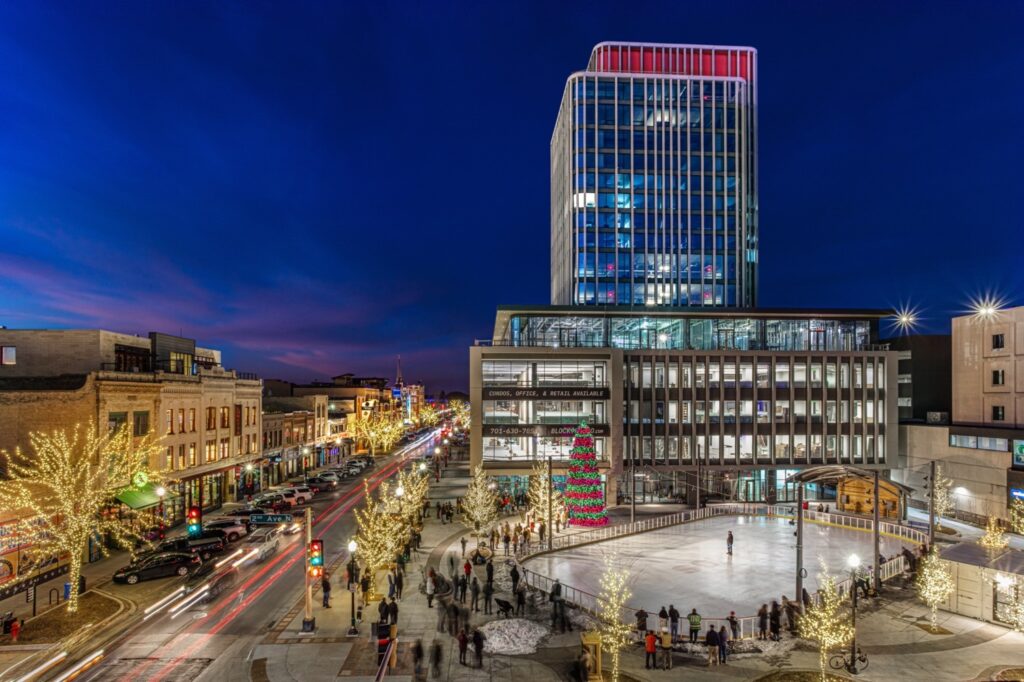 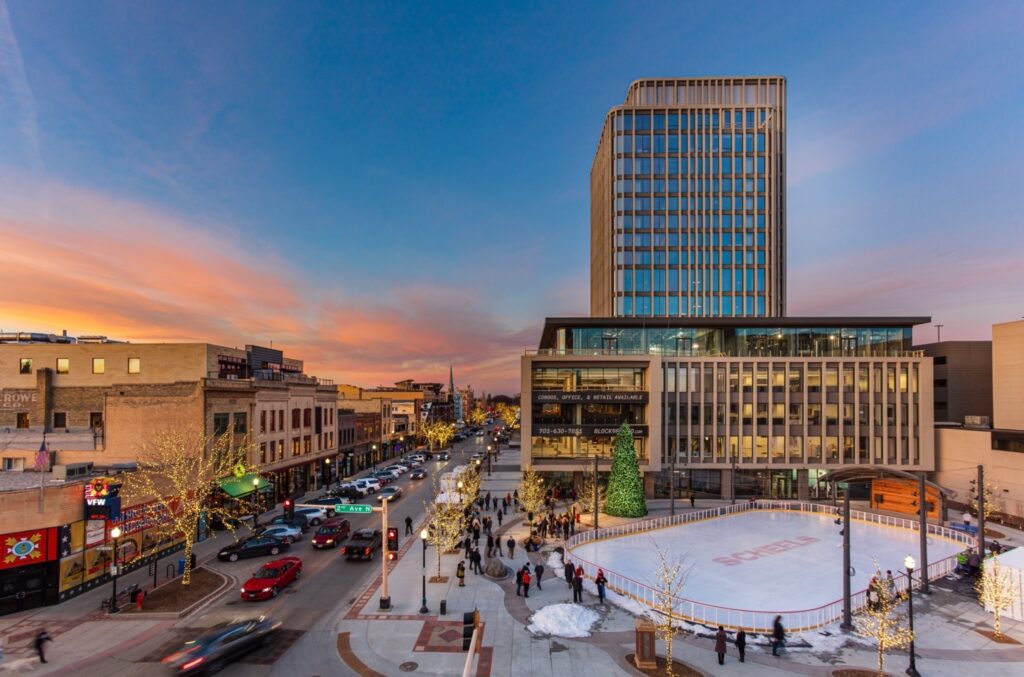 Four years later, Fargo is seeing that vision come to life. Broadway Square is regularly filled with skaters of all ages, offering a Covid-conscious outdoor venue to gather in what has been a rather moderate winter thus far. Ana Rusness-Petersen, the manager for the space, reported that an estimated 4,500 skaters have already carved up the ice since December 10th, 2020. People aren’t just visiting for the rink, though. Rusness-Petersen also estimates that Broadway Square had more than 4,000 visitors over the course of one week in late January. During the holiday season, the plaza was bustling with folks taking selfies in front of the 33-foot LED Christmas tree, social distancing over cups of hot cocoa, and partaking in a Cold Cinema viewing of The Cutting Edge.

Broadway Square’s potential will only continue to grow from here. When Block 9 is complete later this year, it will house offices for more than 300 R.D. Offutt Company employees, the 125-room Jasper Hotel, and Rosewild, a new restaurant slated to specialize in rustic Midwestern fare. Rosewild will also feature a patio along Broadway Square, harkening back to an era of town squares and street-side cafes. The Block 9 project will also add up to five new retail spaces and privately owned condos, as well as ample parking already available in the Block 9 garage.

“We’re going to look at this ‘pre’ and ‘post’ era of before and after Broadway Square,” said Mike Zimney, Senior Development Project Manager at Kilbourne Group, during a recent talk for CreativeMornings. “That’s how big of an impact it’s going to have on this area.”

“We have so many diverse, exciting, and unique activities planned for Broadway Square,” says Rusness-Petersen. By the end of January, she had already tallied over 250 events both produced by the plaza and done collaboratively with other organizations in the area, and she’s sure more will come. She also envisions plenty of days where Broadway Square is filled with Fargoans reading books at café tables or enjoying a snack from one of the many amazing businesses downtown.

“This first year is a lot of experimenting and listening to the feedback we get,” Rusness-Petersen says, “but we are 100% committed to providing inclusive, multidisciplinary, and stimulating experiences for guests.”

While the plaza’s 2021 event calendar is just getting started, one thing is already clear: Broadway Square is an experience that will have something for everyone. Whether it’s yoga, a summer chalk fest, or the Craft Beer & Cider Fest, Broadway Square is well on its way to becoming downtown Fargo’s cultural center.

As seen in Fargo Monthly.